Prospect theory is a behavioural economics hypothesis that explains how people decide between probabilistic choices involving risk where the probabilities of the alternative outcomes are understood. Prospect theory suggests that people make choices based upon the psychological value of potential losses and gains rather than the final outcome.

Prospect theory suggests that people become risk seeking when all options involve a loss and risk averse when presented with a mixed gamble – where both a gain and a loss are possible. This explains why people often go for a riskier option when faced with two solutions to a problem that are both perceived as sub-optimal.

How Does Prospect Theory Work?

Prospect theory was developed by psychologists Amos Tversky and Daniel Kahneman. The theory identified three key cognitive features that influence the perception of financial outcomes which are also common factors in general perception, judgement and emotion. These are: 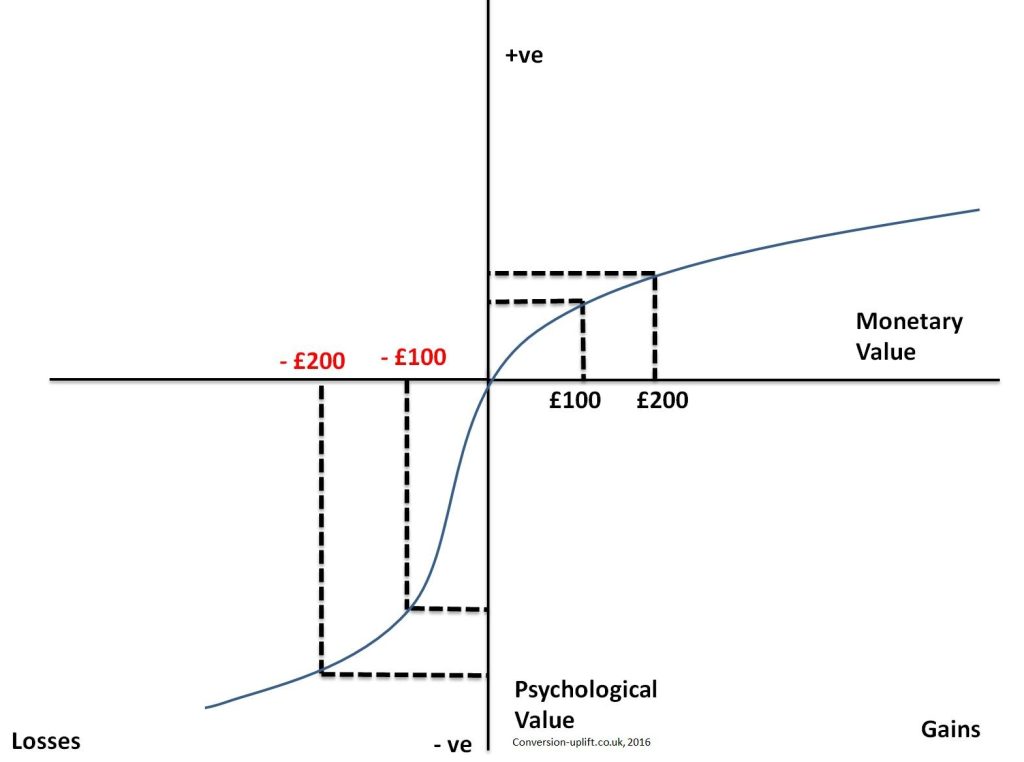 The three cognitive features of prospect theory are illustrated in this chart. We can see the psychological value of gains and losses with a neutral reference point (the vertical axis) dividing the chart from left to right. The S-shape function shows the diminishing returns for both losses and gains. However, the two curves of the S are not symmetrical as the slope of the function changes markedly at the reference point. This is because prospect theory suggests that people’s responses to losses are much stronger than they are to gains.

People place too much weight on options that are certain and are risk averse for gains This means people prefer to take a smaller guaranteed gain rather than take a gamble of a bigger win, but with the potential risk of  getting nothing. However, the opposite is true when people experience a situation with a certain loss. When this occurs people tend to be risk-seeking in an effort to avoid a larger loss.

This suggests that if we want to create an incentive for a behaviour it is better to offer people a guaranteed reward of some kind rather than an entry into a lottery or sweepstake with a potentially large, but unlikely gain.  It also may explain why existing customers often remain loyal to a website or brand. People can take a risk that another site or brand is superior to their existing choice, or they can avoid taking a risk and stay with their existing supplier.

Vitality Insurance uses its comparative propensity to pay out on relatively rare events to persuade prospects to buy critical illness cover. In addition, covering rare cancers that other insurers don’t include in their policies is also another way they are seeking to exploit the possibility effect.

This refers to our tendency to ignore any aspects that are common to both options in order to simplify and concentrate on what differs. Trying to examine every detail of different options leads to cognitive strain and so we naturally look for what is different.  Filtering out common aspects reduces the effort of evaluating options, but it can result in inconsistent decisions depending on how they are framed.

Kahneman and Tversky asked participants to consider two scenarios. In both cases people are given a specific sum of money and the asked to choose between two options.

Scenario 1 –  You are given $1,000 in addition to what you own and have to choose between these options:

Scenario 2 – You are given $2,000 in addition to what you own and have to choose between these options:

In the first scenario, the large majority chose the $500 for sure.

In the second scenario, the large majority chose the gamble.

Information also needs to be displayed in a way that allows users to easily find the common aspects of an offer so that they can concentrate on the differences between choices. Showing too much information will make it difficult for users to compare options and can result in information overload. This can often lead to users abandoning a site as they are unlikely to make a decision if they don’t feel comfortable about making a choice.  People like some choice so that they feel in control, but limit the number of options to not more than four or five at most.

To aid the decision making process product comparison tables can be an effective way of simplifying the evaluation of different options. Such tables present features and benefits side-by-side and so make it easier to digest information. They should also be used to highlight differences and provide information in a consistent way for all options.

Prospect theory also gives us some important insights about the user experience as a whole. People respond more strongly to a loss or negative user experience that results in frustration, anger or  disgust than they do with a positive interaction with a website. Users are much more likely to remember and share a negative experience than a positive one. This is why it is so important to conduct regular usability testing and seek user feedback to identify and fix problems before they impact on the perception of the site.

When playing games such as online poker we can also see the behaviour predicted by prospect theory. If a player has a low table balance and is faced with another player raising the stakes to force them to fold, they will often go all-in because both options are potentially a loss. They become risk seeking because there is a chance that their hand may beat their opponents and they will avoid a loss.

On the other hand when people buy a dog or a cat they understand that there is a probability of a potential loss (i.e. cost of vet bills) if their animal gets sick, but also a probability of no loss (i.e. their pet has no health issues).  In this instance people weigh up the cost of buying pet insurance against the likely cost of vets bill if their pet needs treatment.  They are likely to take the risk of not buying pet insurance if they estimate the cost of treatment will be less than the insurance premiums they would have paid. This is why insurers often highlight the cost of treating rare conditions to exploit the possibility effect.

Professional risk takers such as fund managers and professional poker players are more tolerant of losses because they have learned not to react emotionally to losses. This means that such people are much less loss averse. Indeed,  research among financial professionals by Abdellaoui,  leichrodt  and Kammoun found  they show risk seeking behaviour and take very little notice of losses. They were more willing to take a risky gamble and largely ignored losses.

Although prospect theory certainly explains human behaviour more accurately than utility theory, it does, like any model of behaviour, suffer from a number of blind spots.

It does not allow for the disappointment we feel when winning nothing due to an unusual event (i.e. there is small probability of not making a gain). This is because it does not allow for the value of an outcome to change when it has a very low probability. We would perceive this as bad luck if the chance of not winning anything is very low and would see it as a loss.

Neither can prospect theory allow for the regret we feel when we select a gamble due to greed and then lose out on both potential gains due to the option we selected.  We experience regret when an outcome depends on a choice we could have made, but didn’t take.

Prospect theory demonstrates the power of guarantees and money-back offers to tap into our risk-averse nature when faced with the possibility of gains and losses (i.e. making a bad decision). Loss aversion also provides a strong driver of brand loyalty and can be used by companies to frame offers as a potential loss to maximise the perceived psychological value of offers.

The nature of the loss/gain function described by prospect theory  provides brands with the opportunity to break up offers into a series of gains to maximise perceived value (see Hedonic Framing). However, where losses are inevitable people are more willing to seek out risky choices as diminishing sensitivity to losses impacts on behaviour. This means that unlike with gains, it is better to combine losses into a single loss (e.g. price + extras) than segregate small losses.

Loss aversion – Why are people more concerned about potential losses than winnings?