Hedonic framing refers to how people try to maximise psychological pleasure and minimise pain (regret) when faced with decisions relating to gains and losses. This means that two individual gains are perceived to be more valuable than a single larger gain of the same value. This is because the value curve is concave for gains.

Similarly, two separate losses will be perceived to be less painful if combined into a single, larger loss.  This is because the value curve for losses is convex.  The chart below illustrates how people perceive the psychological value of gains and losses due to hedonic framing.

Loss aversion is probably the most powerful force in keeping the status quo because people hate the feeling of regret and are less motivated by gains of an identical size. Most of our decisions are also made by our fast, intuitive System 1 mind which is heavily influenced by cognitive biases and rules of thumb (see heuristics). 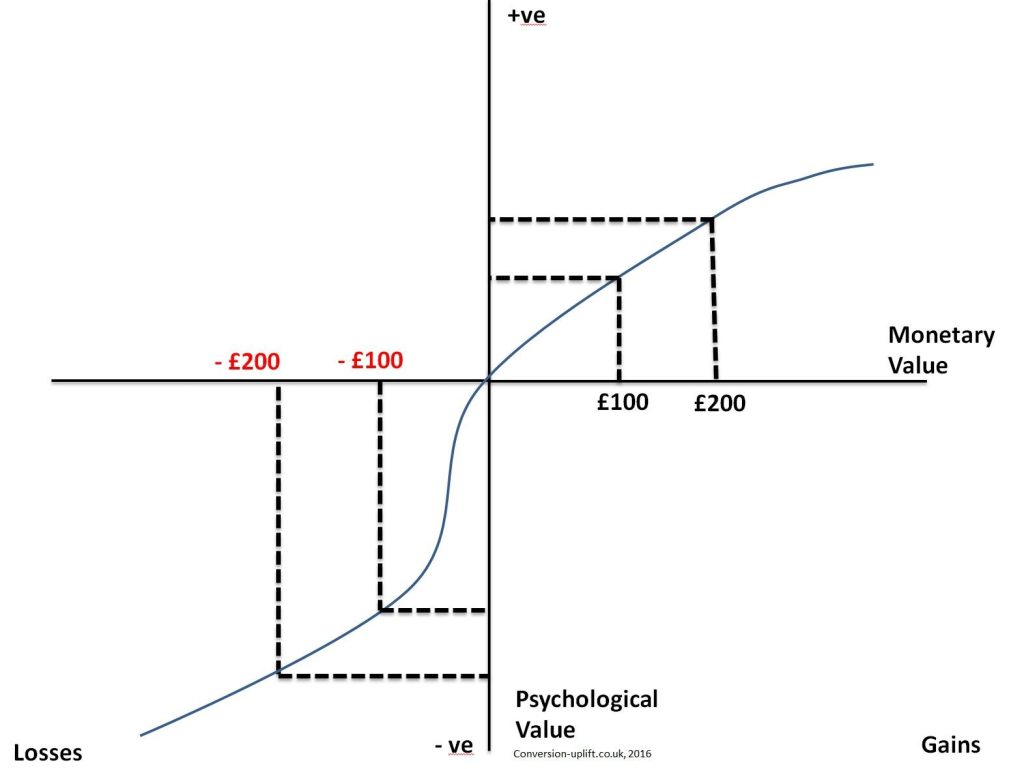 For conversion rate optimisation this suggests that it is better to phrase a saving or discount as a potential loss to the customer as this will perceived to be of greater value than expressing it as a gain.

When promoting a large gain, such as a deposit bonus, it is better to break it up and promote a number of smaller bonuses that in total equal the larger bonus as they will be perceived to be of greater value than the single bonus. This is explained in more detail in the secrets of optimising gambling sites – bonuses. This discusses how bonuses are used for acquisition marketing.

When a customer makes a loss or they incur a charge it is preferable to show it as a single loss or payment rather than break it up into smaller payments.  For example a £3,000 hot tub seems a lot less expensive when combined with the cost of a £400,000 house.  Car manufacturers also use this approach by trying to sell extras on top of the showroom price.

For debt management, it is better to aggregate debts into a single amount, rather than keep different debts separate. However, people are prone to segregating debts due to mental accounting, but because the loss curve is convex this will increase the perception of the size of the debt. This may explain why aggregating debt makes people feel more comfortable with managing debt. Aggregating debt may also benefit from an increased sense of autonomy which is known to improve motivation and well-being.

Loss aversion – The psychology of loss.

Prospect theory – where the probability of a loss is known

Mental accounting – how people manage their different pots of money

Hedonic treadmill – how people respond to purchases and life events

Inside The Nudge Unit – How small changes make a big difference!