The Boris Johnson Brexit bus lie that the NHS would get an extra £350m a week was one of the most contentious issues of the 2016, EU referendum campaign. Along with “Turkey is joining the EU”, the claim that the UK sends £350m a week to the EU, and that money could instead be spent on the NHS created much debate during and after the referendum result.

Dominic Cummings, the Campaign Director of Vote Leave, who came up with the ‘Take back control’ slogan, also wanted to capitalise on concerns about funding for the NHS. Cummings knew the NHS was something many voters cared deeply about and proposed a slogan for this purpose – “We send the EU £350 million a week, let’s fund our NHS instead”.

The slogan was then put on the side of the official Vote Leave campaign bus. Johnson, Michael Gove and other Leave campaigners claimed the £350m figure represented funds that the UK did not have control over as a result of having to pay for membership of the EU. It was explicitly claimed this money could redirected to the NHS instead.

The Boris Johnson Brexit bus lie of  £350 a week for the NHS is misleading and false for two reasons.

We could also add that because Conservative government had been underfunding the NHS since 2010, the government should have been increasing investment in the NHS to make up for the historically low levels of funding. However, because the Remain campaign was led by David Cameron, who was responsible for the policy of underfunding, no attention was given to this as a reason why the NHS was in need of additional money.

3. What did the UK Statistics Authority say?

The UK’s independent Statistics Authority said the EU membership fee of £19 billion a year, or £350 million a week, is “not an amount of money that the UK pays to the EU each year”. They estimated a figure of £350m is around what the UK would pay if it did not have the rebate. They put actual figure as around £250 million a week, but of course even some of this money comes back to the UK in the form of funding. Wales for example, was a net beneficiary of EU membership because of poverty and its weak economy.

For Wales, the Boris Johnson Brexit bus lie was even more misleading because Wales received £245 million more from the EU than it contributed. Wales received money from the EU to invest in universities, industry and infrastructure in response to the economic imbalance. Wrexham for example, received £24m in EU funds for the Entrepreneurship Support scheme to help business leaders achieve commercial success and create jobs in Wales. 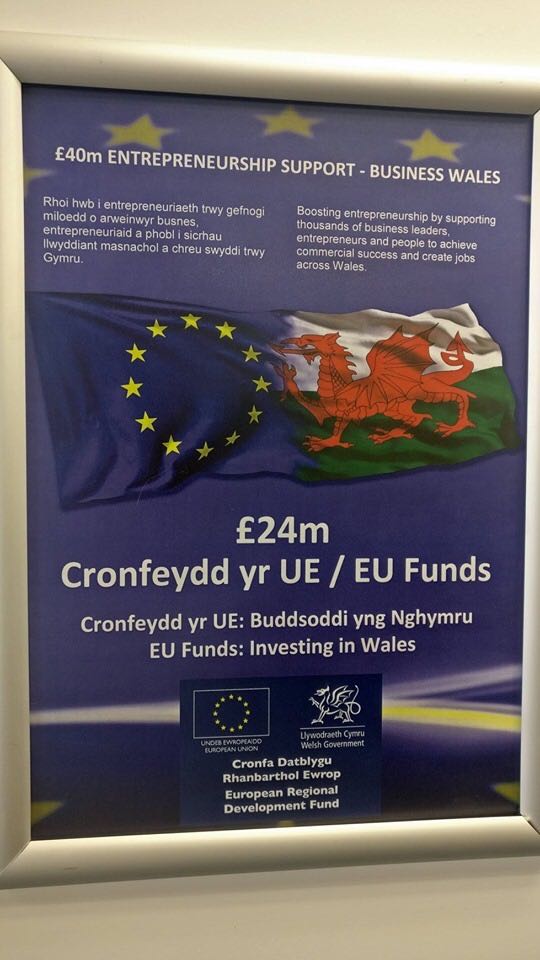 Westminster funds London at a higher rate per head than Wales, but because of the EU’s policy to encourage equality, Wales received a bigger share from the EU. However, the Westminster government’s own estimates projected that £5bn will be lost to the Welsh economy as a result of  the UK leaving  the EU.

6. What has Johnson said about the bus lie since the referendum?

Almost immediately after the referendum many Leave politicians admitted there was no £350 million a week going to the NHS. Even if there had been a Brexit bonus Conservative MPs and ministers indicated it could not all be allocated to the NHS. Despite this, in September, 2017,  Boris Johnson revived the £350 million claim in a 4,000-word essay in the Daily Telegraph.

This prompted a critical response from Sir David Norgrove, UK Statistics Chief, who said the then foreign secretary’s use of the £350 million figure was “a clear misuse of official statistics”. In his response to UK Statistics criticism of his use of the figure Johnson said his words had been interpreted in a crassly simplistic way and that it was a “wilful distortion”. In other words Johnson was admitting that the Brexit bus claim was untrue all along.

In July 2017, Dominic Cummings  claimed Brexit may have been “an error”. In a late night exchange on Twitter, Cummings said the referendum was a “dumb idea” before trying other ways of taking back some control from Brussels.

In February 2019, Johnson faced a £570,000 crowd-funded private prosecution by Marcus Ball over the lie. Mr Ball’s lawyers accused Johnson of being aware the Vote Leave claim was false and used the amount to “mislead” the public. Initially a judge ordered Johnson to appear at Westminster Magistrates’ Court in May 2019, but this was overturned by a Divisional Court in June, 2019.

However, the case was thrown out of court in August, 2019. The judge concluded that allegations that Johnson know the £350 million a week claim was false would not be classed as a neglect of duties or an abuse of state power.

8. Johnson Tries to Bury the Bus Lie in Google:

In June 2019, in an interview with Talk Radio, Johnson was  asked what he does to switch off from  politics. Johnson replied that he painted buses on wooden crates, including the passengers enjoying themselves. The Guardian claimed it was “a pointless, obvious lie. One there had been no need to tell.”

Johnson’s answer did gain a substantial amount of media coverage. As a result it pushed the Vote Leave bus lie down Google and other search engine rankings.  At the time a number of commentators thought it was a deliberate attempt  to reduce the ranking of the boris bus lie. Creating a positive story around chosen key words is a common reputation management SEO strategy used to hide negative stories on the web.

However, Maughan Rimmer, a Child and Adolescent Psychiatrist, noticed what appeared to be  unconscious body language when Johnson began to answer the question, which he then covered up with an apparent confabulation (fabricating a story to fill gaps in his memory).  In a tweet Rimmer states:

“When asked how he likes to relax, Boris unconsciously mimes holding a glass in each hand. He then drinks both in quick succession before confabulating some tosh about making model buses out of wine boxes. Maybe a body language expert could interpret this mysterious gesture!” – Maughan Rimmer, 26th June, 2019.

This begs the question, does Boris Johnson have an alcohol problem?

On 11th September, 2019, Boris Johnson appeared to accept the £350m a week was inaccurate when he argued  Labour’s opposition to a general election was costing the “country an extra £250 million a week”. But even then, he still indicated all this money could go to the NHS which is highly unlikely.

“Opposition parties have been trying to disguise their preposterous cowardice by coming up with ever more outrageous excuses for delaying an election until the end of October, or perhaps November, or when hell freezes over, in the dither, delay and procrastination that has become the hallmark of the opposition. “Why are they conniving to delay Brexit, in defiance of the referendum, costing the country an extra £250 million a week for the privilege of delay — enough to upgrade more than five hospitals and train 4,000 new nurses? – Boris Johnson, House of Commons, 11th September, 2019.

As prime minister Johnson has established a reputation for  regularly lying at PMQs.  Indeed, he was accused of making 5 lies or half-truths during his first ever Prime Minister’s Question Time with Jeremy Corbyn.

During the COVID-19 crisis Johnson regularly gave inaccurate answers to Sir Keir Starmer’s questions at Prime Minister’s Questions. On more than one occasion Johnson claimed child poverty had gone down under the Conservative’s and dismissed Keir Starmer’s evidence that this wasn’t true.

Since 2016, Johnson repeatedly told Parliament, the DUP and businesses in Northern Ireland that no prime minister could agree to a border down the Irish Sea. He also dismissed EU claims there would be custom checks between GB and Northern Ireland.

However, the UK government confirmed in May, 2020, that there would be checks on animals and food produce entering Northern Ireland from other parts of the UK.  The government has also indicated it may pay businesses in Northern Ireland for the additional costs incurred as a result of border checks.

If the £350m a week extra for the NHS was a big lie, Johnson tried to get away with a similar untruth at the press conference when he announced the trade agreement with the EU on 24th December, 2020. During the press conference, Johnson announced he had negotiated a trade deal which avoided tariffs and quotas, but he also claimed this would avoid non-tariff barriers and the UK had complete control of its laws.

However,  ITV’s Robert Peston, accused Johnson of mis-selling his deal because there would be a huge increase in red-tape (non-tariff barriers) and Johnson had agreed to the EU’s level playing field demands. This means the trade deal will create significant new barriers to trading with the EU for UK based exporters. In addition, the UK will have to follow EU regulations with the potential for tariffs if it does not.

The fishing industry  accused Johnson of  betrayal. The agreement means current rules will remain largely in place during a five and half year transition period. There will then be annual consultations to agree the level and conditions for EU access to UK waters. However, it is clear in the agreement that the EU can reduce access to its market if the UK attempts to restrict EU fishing in its waters.

The deal that Johnson agreed fails to meet promises made by Vote Leave in 2016. These included:

Johnson has continued to to create more untruths, and misinformation as the impact of Brexit become more clear now that the UK has left the EU.

For our other posts about Brexit, including why referendum can be misused, go to our Brexit menu page.

Thank you for reading my post and if you believe in the UK  rejoining the European Union please join your local EU group. If you live in North Wales join our Wrexham for Europe Facebook group.