Boris will not resign!

Following Boris Johnson’s latest gaff about the Libyan city of Sirte becoming the new Dubai after they “clear the dead bodies away” there have been renewed demands for Theresa May to sack him. You would think that any normal Foreign Secretary would offer their resignation to avoid causing the UK any further embarrassment.

But, there are no signs that Boris plans to resign and instead he went on Twitter to defend himself: 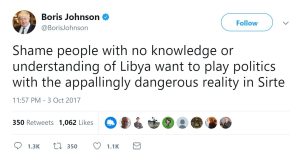 Of course this follows on from  Boris writing a 4,000 word essay for the Daily Telegraph and contributing to an article in The Sun setting out his own demands for Brexit. Neither article was approved by Number 10. Most commentators have seen this as a blatant attempt to undermine Theresa May’s authority so as to position himself as her obvious replacement. Theresa May’s response that “Boris is Boris” and that she doesn’t want a cabinet of “yes men” clearly contradicts the rules of collective responsibility. 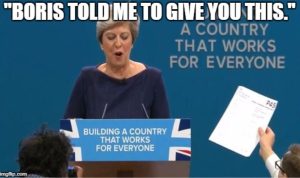 Boris offers no substance for Brexit!

Boris has framed soft Brexit as betrayal and set out his own red lines that repeat the having our cake and eating it approach. These red lines are not consistent with achieving a good deal for Britain  because the Leave campaign blatantly lied that they could get all the benefits of EU membership without needing to follow its rules.

In his speech at the Conservative Party conference the best Boris could say about Brexit was “it is going to be great and we need to believe in ourselves and believe we can do it.” There was no substance to why Brexit would benefit the UK as he knows full well there is nothing to support his opinion.

Boris has no positive vision of Brexit because the EU does not restrict member states from external trade. Just look at Germany which is the third largest exporter in the world. In 2016 China become Germany’s largest trading partner, unseating the US which fell to third place, behind France. Even France exports more to the US than it does to the UK.

In addition, the Government’s claim that only 46% of UK exports go to the EU is distorted by the flow of gold bullion in and out of London. Analysis by Sky News shows that when Gold is excluded from trade figures a half of UK physical exports over the past five years have gone to the EU.

Boris wants a way out!

Before  he joined  the Leave campaign Boris had on number of occasions expressed alarm at the idea of the UK breaking away from the EU due to the cost and complexity. In 2013 he wrote in the Daily Telegraph that people should stop blaming the EU for the UK’s problems.

“that most of our problems are not caused by Brussels, but by chronic British short-termism, inadequate management, sloth, low skills and a culture of easy gratification and under-investment”. – Boris Johnson – Daily Telegraph – 2013

Even as late as February 2016 he was quoted in the Daily Telegraph explaining that the process would take several years and would divert resources away from the real problems of the country. 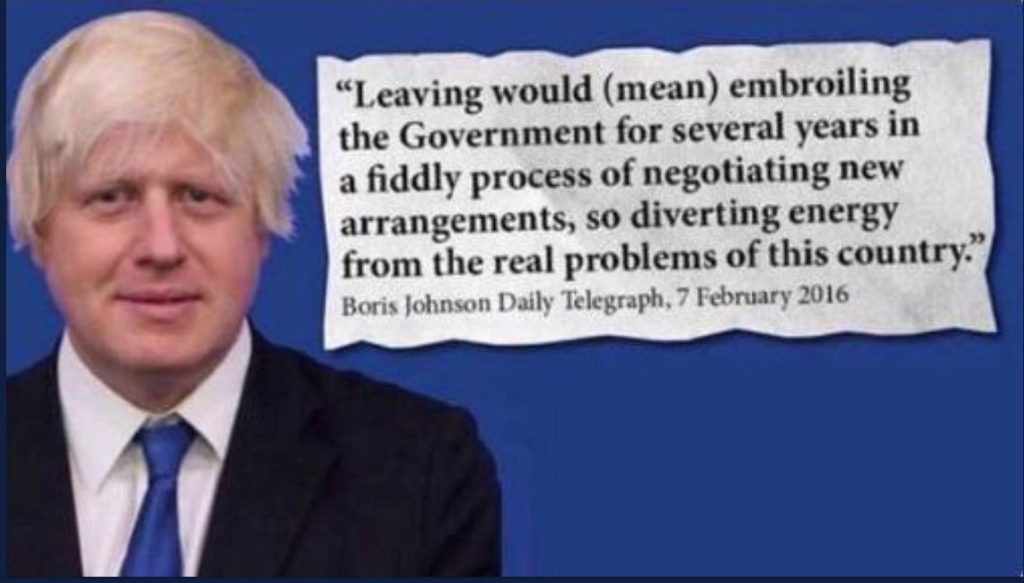 Boris clearly saw the the EU referendum campaign as an opportunity for relaunching his campaign to become the next leader  of the Conservative Party. He wanted to undermine David Cameron’s authority and get the support of the sizeable  Euro-sceptic element of the party behind him.  The decision to support Vote Leave was purely for personal gain, there was no thought about what’s best for the country.

But as with many Leave campaigners Boris did not expect a majority of voters to support Brexit. So when the result came in he was exposed as having no plan or tangible vision to proceed. He even decided not to enter the race to be the new leader of the Conservative Party and prime minister.

Boris knows that Brexit will be a disaster for the UK economy and our influence around the world. His only hope is that May sacks him and he can then claim May didn’t follow his hard Brexit strategy. That’s why he set out red lines that are incompatible because he knows May can’t even try to adhere to them. So, expect Boris to continue to defy May as he tries to get himself out of the mess he helped create.

Referendum – Are referendum a device of dictators and demagogues?

Reasons for blocking Article 50 – Should MPs vote to stop Article 50?

Brexit – The psychology of Brexit – why emotions won over logic?