Is blockchain technology a useful and valuable innovation or is it 99% hype? I’ve noticed lots of articles claiming that it will change digital marketing and advertising forever, but I’ve seen little evidence of live applications that solve any real problems. Can it really help with fraud, conversion rate optimisation or attribution?

To get to the bottom of the blockchain technology phenomena I’ve analysed the nature of the technology to understand how it works and identified potential limitations and flaws. I have also evaluated how it can be used in marketing given how it works and progress made so far.

What is Blockchain Technology?

Blockchain technology is a shared public ledger that enables untrusted parties (i.e. not known to each other) to track and reconcile changes to digital information. It allows all parties to keep track of changes to the ledger without the need for a central record keeper. Every computer connected to the network (referred to as a node) automatically downloads a copy of the blockchain and saves it onto the computer’s hard-drive.

Why was Blockchain created?

Blockchain technology was originally designed as the accounting system for the virtual currency Bitcoin. The term is derived from the process of recording recent transactions (a block). Once completed a block is added to the blockchain in chronological order as a permanent record. As soon as a block is completed a new one is automatically generated.

How is data protected?

Each block contains information to reconcile the previous block and the blockchain holds complete information on each user’s address and their balance rights from one block to another. As each block is encrypted this protects it from hackers. As the blockchain is an ever-growing chain of blocks there are concerns about storage and synchronisation.

What are the main problems with Blockchain?

Blockchain technology is slow compared to cloud-based networks. Depending upon who you speak to Blockchain can only process around 4 to 7 transactions a second compared to Visa which can process over 1,500 transactions per second. The main reason for this is that Blockchain requires each participant to hold up-to-date copies of the database.

This results in blockchains having high latency which is the time it takes for the whole network to be updated. This is because each node is receiving constant updates and this makes for a pretty inefficient and difficult to scale network.

This is where a group of miners (for bitcoin) control over half of the network’s mining or computer power (i.e. nodes) in a blockchain. In this circumstance the 51% can tell a lie and this will become a truth for the whole blockchain network. With bitcoin this means the controlling group could potentially stop new transactions being registered and block payments between some or all users. This means they could reverse transactions and spend coins more than once.

When blockchain is used as a database it is prone to human data entry errors just like any other database. It is important that transactions or events are recorded accurately as otherwise the data could become unreliable or misleading.

Blockchain technology is a highly specialised field which has spawned a whole new vocabulary. This is full of jargon and difficult for people to easily understand. The risk here is that mistakes will be made due to the complexity of the technology and adoption may be hindered by a lack of perceived transparency.

Discussions around blockchain protocols are very technical and disagreements are common when it comes to decisions regarding ‘forking’ of a blockchain. Forking is the process of changing the blockchain protocol after more than half of users have given permission to execute an update.

Getting companies to co-operate on data sharing and storage is difficult because it goes against most corporate culture which values secrecy in order to gain a competitive advantage. For regulated industries that demand privacy blockchain it is even more problematic and so many ventures have adopted distributed ledger technology as this creates a private network of known and trusted parties. However, many of these ventures have so little to do with blockchain technology it begs the question has anything new been created? What is the point?

Ethereum enables users to insert code into blockchain which executes automatically. This is known as a smart contract as it allows people to enter into contracts with each other and because all Ethereum Blockchain participants also receive the same code the contract becomes self-enforcing. Smart contracts have the advantage that they can speed up transactions to around 20 per second compared to 6 to 7 transactions per second for blockchain.

The intention here is to create a global supercomputer to automatically execute contracts. This could allow developers to create more complex code to build applications to run on top of Ethereum. Potentially this would have much lower administrative costs and better security than existing cloud-based applications.

Will Ethereum change the web?

The internet relies on shared protocols (e.g. TCP/IP, HTTPS etc.) which have generated huge amounts of value. However, the vast majority of this value has been extracted from at the applications layer, mainly in relation to data (e.g. Facebook, Amazon, Google etc.).

It has been suggested that Ethereum offers a new protocol base layer with a built-in cryptocurrency. Value is therefore more easily extracted at the protocol layer than is currently the case. This presents an opportunity for developers to build their own smart contracts to compete against each other for a share of the built-in cryptocurrency. The lack of ability to scale though would appear to undermine this vision and so this appears to be unlikely at present.

What are the potential applications for blockchain technology?

There is a lot of hype about blockchain technology and in particular that it is going to replace many centralised payment systems. This is not practical because of high latency of blockchain. This may partly explain why so few of the top 500 e-commerce sites accept Bitcoins, though this may also be due the volatility in the value of the currency. As bitcoin is not backed by any central bank or tangible assets the currency has little to support it if there is a drop in user confidence. 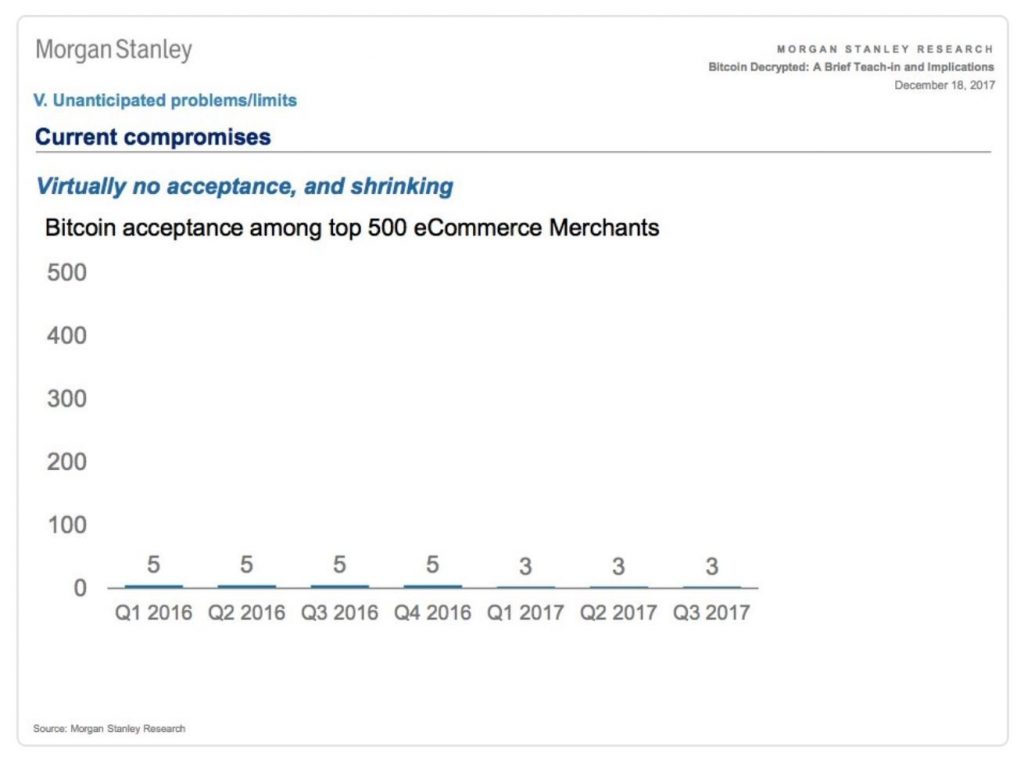 Where the number of transactions per second is relatively low it has been suggested that there are opportunities to use blockchain technology to replace expensive accounting and payment networks in the financial service industry. However, concerns about privacy, scale, competition, compliance and legal recourse are likely to be a significant barrier here. Some ventures  are using distributed ledger technology here but this moves aware from the main point of blockchain and so you wonder what the point is. 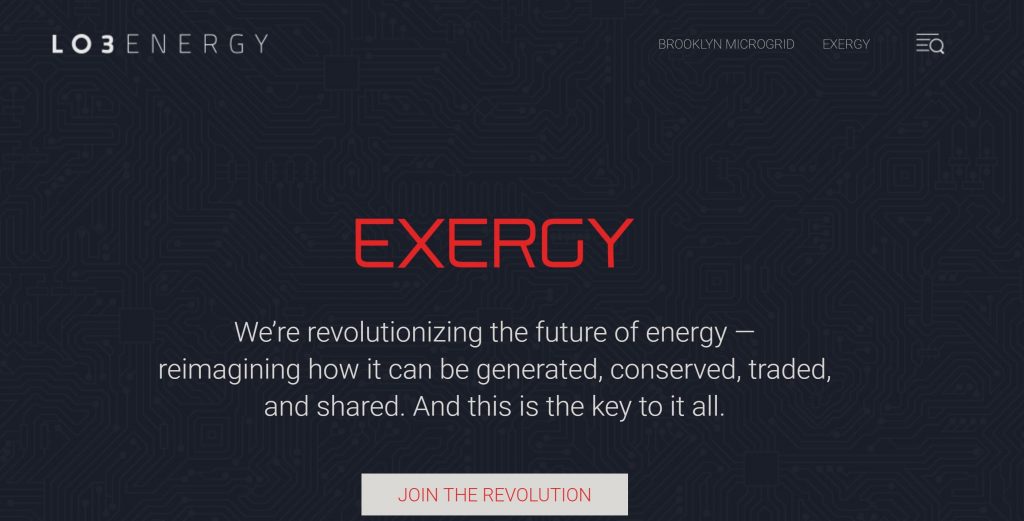 There may be more opportunity to use blockchain technology in small networks for validating transactions to eliminate the cost of a centralised administrator. In 2017 LO3 Energy  established a peer-to-peer microgrid in New York to allow participants to tap into community resources to generate, store and sell solar energy to other members of the community to validate transactions on a public ledger.  This application of blockchain in a highly centralised sector may indicate that the technology may be most beneficial in small community networks rather than fast moving global networks.

How can blockchain be used in digital marketing and conversion optimisation?

There are many articles suggesting that blockchain could be used to reduce cheating or fraud with regard to digital advertising.  The main problem with this is that blockchain in its current form is not scalable for high frequency transactions. Verifying ad delivery and confirming that a real visitor has seen an ad may only work for advertising networks with relatively low frequency transactions, certainly not for Facebook or Google.

The paradox of blockchain is that it only works in large, widely dispersed networks and yet the very size of the network leads to high latency which makes it inefficient and unsuitable for processing high volumes of transactions.  It has also been suggested that blockchain could be used for the approval process of digital marketing assets or adverts. However, because the parties involved in an approval process are usually all known and trusted individuals it is not necessary to have a public ledger. This could simply be completed using distributed ledger technology and so does not require blockchain.

It is possible that other blockchain applications will be created that benefit from the key features of the technology. However, unless the technology is implemented in a way that is easy for consumers to use and benefit from there is no guarantee that it will deliver what many claim it can. Further, corporate culture and the demands of regulated industries around privacy, scale and compliance are likely to be a huge barrier to the adoption of blockchain technology in the real world. Together with the serious limitations of the technology it is difficult to see how blockchain can be implemented to resolve many serious issues.